By Stacy Liberatore For Dailymail.com

Leaked audio from more than 80 internal TikTok meetings reveal Chinese-based employees of the popular video sharing app have repeatedly accessed US user data, according to a report by BuzzFeed News.

The recordings, which were captured from September 2021 through January 2022, include 14 statements from nine TikTok employees who met to discuss ‘Project Texas’ – the classified effort to stop engineers in China from retrieving the data.

One of the audio clips is of a director at TikTok who referred to a ByteDance engineer as a ‘Master Admin’ who ‘has access to everything’, according to BuzzFeed News.

TikTok made its own announcement, shortly after the bombshell report was published, that states: ‘100% of US user traffic is being routed to Oracle Cloud Infrastructure,’ rather than being stored in its own data centers in the US and Singapore.’

Scroll down for video

A TikTok spokesperson told DailyMail.com in an email: ‘As we’ve publicly stated, we’ve brought in world class internal and external security experts to help us strengthen our data security efforts.

‘This is standard industry practice given the complexity of data security challenges. In May, we created a new in-house department, U.S. Data Security (USDS), with US-based leadership, to provide a greater level of focus and governance on US data security.

‘The creation of this organization is part of our ongoing effort and commitment to strengthen our data protection policies and protocols, further protect our users, and build confidence in our systems and controls.’

The recordings obtained by BuzzFeed News, and reported on by Emily Baker-White, focus on concerns that echo made by former President Donald Trump while he was in office.

In August 2020, Trump signed an executive order that would ban TikTok and the Chinese chat app WeChat in the US. 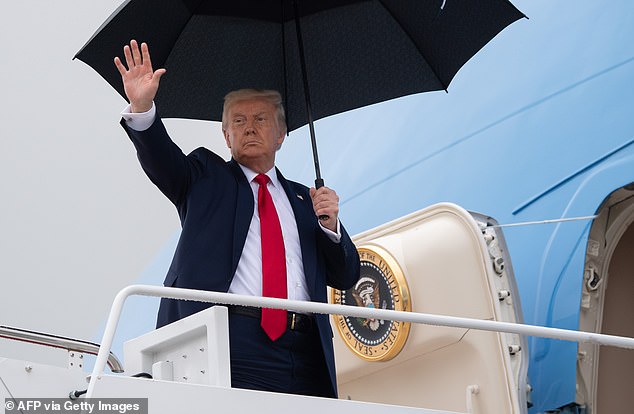 President Joe Biden last year revoked executive orders from Trump and produced a new executive order that nixed the unimplemented ban on TikTok and called for ‘an evidence-based analysis to address the risks’ from internet applications controlled by foreign entities.

TikTok has acknowledged access to its user data has been a problem.

In 2020, TikTok’s Chief Information Security Officer Roland Cloutier wrote in a blog post: ‘Our goal is to minimize data access across regions so that, for example, employees in the APAC region, including China, would have very minimal access to user data from the EU and US.’

According to BuzzFeed News, Project Texas will ultimately stop large amounts of user data from flowing to China, but the recordings note finding these channels has proven difficult.

During one of the meetings in the recorders, employees discuss how data moves through internal TikTok and ByteDance tools, including those used for content moderation and monetization.

And several of the recorders reveal employees in charge of these tools are unable to find the loopholes in which data is passed to China.

However, TikTok’s announcement to store data on Oracle notes that the app will continue to use its own datacenters in Virginia and Singapore to backup information as it works to ‘fully pivot’ to relying on Oracle in the United States,’ TikTok shared in a post.