The staff of the second season of the live-action series of Haro Aso‘s Alice in Borderland (Imawa no Kuni no Alice) manga revealed six new cast members for the series on Monday.

The new cast members include Yuri Tsunematsu (left in image above) as the high school student Heiya, Tomohisa Yamashita (center) as “King of Clubs” Kyūma, Hayato Isomura (right) as Banda, Kai Inowaki as Matsushita, Katsuya Maiguma as Yaba, and Honami Satō as Kotoko.

The second season will debut on Netflix in December 2022 worldwide. 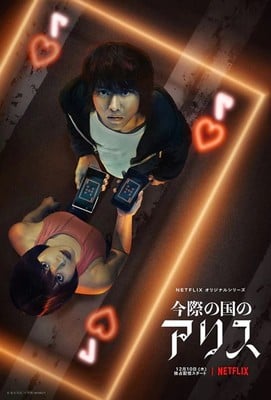 The first season debuted on Netflix in December 2020. It was the most viewed live-action series in Japan in 2020, and it ranked in Netflix‘s top 10 in 40 countries and territories worldwide. Shinsuke Satō (live-action Bleach, Kingdom films; Oblivion Island anime film) will again direct the series. Yoshiki Watabe and Yasuko Kuramitsu penned the fist season’s scripts with Satō. ROBOT is credited with planning and production.

The manga centers on Ryōhei Arisu (pronounced the same as “Alice” in Japanese), a male high school student who is irritated with his intolerable everyday life. One night, he tags along with his bad friends Karube and Chōta to hang out in town. However, the town is suddenly covered in giant fireworks. When he comes to his senses, Ryōhei notices that no one else is around. Finding themselves in a different world, Ryōhei, Karube, and Chōta are forced to participate in survival games or die right off the bat. The three fight to live, as well as to find a way back to their own world.

A spinoff series titled Alice in Borderland: Chi no Kyokuchi – Daiya no King-hen ran from October 2014 to February 2015 in Weekly Shonen Sunday. Aso also launched a separate spinoff series titled Imawa no Michi no Alice in Shogakukan‘s Monthly Sunday GX magazine in August 2015, with art by Takayoshi Kuroda. The manga ended in February 2018, and Shogakukan published eight volumes for the series.

Viz Media licensed the original manga, and released the first volume on March 15.