NASA will reattempt the ‘wet dress rehearsal’ of its 365ft moon megarocket today, having been forced to call off yesterday’s test amid technical glitches and stormy conditions.

The enormous Space Launch System (SLS) rocket, which is at Pad 39B of NASA’s Kennedy Space Centre in Floridawas initially given the go-ahead at 06:45 EDT (11:45am BST) yesterday morning.

However, the test was called off at 12:06 EDT (17:06 BST) following a technical glitch, which meant the mobile launcher couldn’t be pressurised.

‘The fans are needed to provide positive pressure to the enclosed areas within the mobile launcher and keep out hazardous gases,’ NASA explained.

‘Technicians are unable to safely proceed with loading the propellants into the rocket’s core stage and interim cryogenic propulsion stage without this capability.’

Meanwhile, four lightning strikes were detected near the launch pad, including one that was particularly strong. Thankfully, none of them struck the SLS rocket. 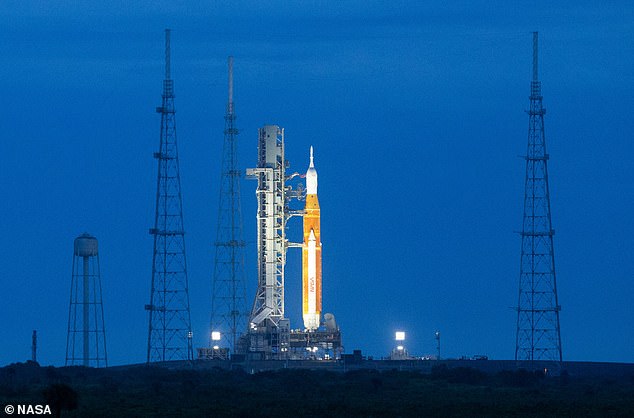 Yesterday’s test was called off at 12:06 EDT (17:06 BST) following a technical glitch, which meant the mobile launcher couldn’t be pressurised

Nasa’s Space Launch System: The largest rocket ever made

Space Launch System, or SLS, is a launch vehicle that NASA hopes will take its astronauts back to the moon and beyond.

The rocket will have an initial lift configuration, set to launch in the early-2020’s, followed by an upgraded ‘evolved lift capability’ that can carry heavier payloads.

During a teleconference last night, Mike Sarafin, Artemis I mission manager and Charlie Blackwell-Thompson, Artemis launch director said that teams are continuing to troubleshoot the issue with the fans.

‘The SLS boosters will be powered down, and then powered up again Sunday morning. Teams will work through the night and into the morning to complete necessary preparations ahead of loading propellants into the rocket.’

The test will be the first full ‘wet dress rehearsal,’ where NASA will conduct a series of final prelaunch tests, including loading the SLS propellant tanks and conducting a launch countdown under similar circumstances to the real launch later in the year.

It provides engineers and officials with a host of information on how the rocket performs, how procedures play out, and informs the decision on when to launch.

The name, wet dress rehearsal, comes from the fact the tests are primarily designed to show that the rocket can be loaded with super-cold liquid propellants.

‘The wet dress rehearsal will be the final major test for the Artemis I mission and will ensure the rocket, spacecraft, ground equipment and launch team are “go” for launch,’ NASA explained.

Atop the massive Space Launch System rocket is the Orion capsule, which will take the first woman and first person of colour to the moon some time after 2025.

NASA expects the official Artemis I launch, the first involving SLS and Orion, to happen anytime from the end of May to mid-July – depending on the rehearsal. 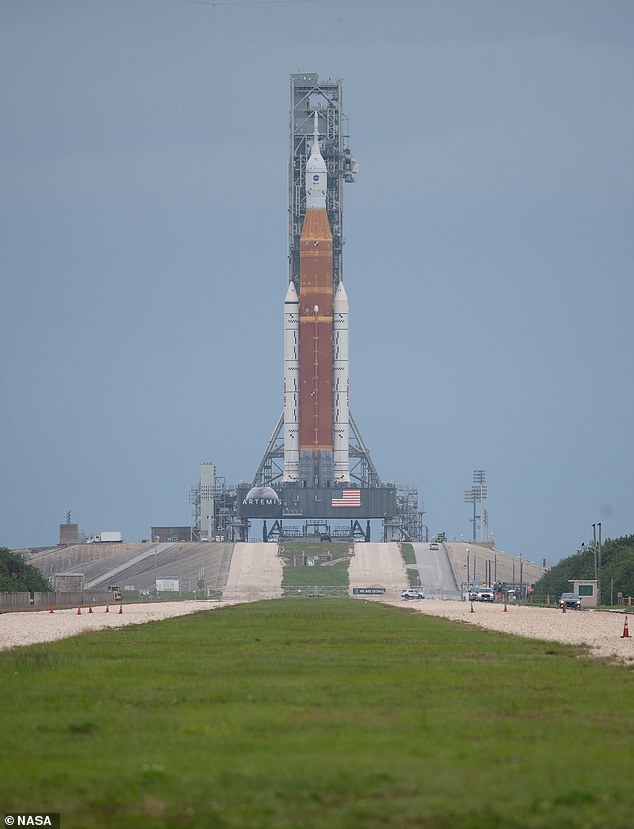 Space Launch System, or SLS, is a launch vehicle that NASA hopes will take its astronauts back to the moon and beyond

‘We continue to evaluate the May window, but we’re also recognising that there’s a lot of work in front of us,’ said Tom Whitmeyer, NASA Deputy Associate Administrator, with responsibility for exploration systems development.

That work includes analysing the data from the wet dress rehearsal.

‘During the test at the launch pad, engineers will be on duty in the Launch Control Center and in other stations where they will work during the Artemis I launch,’ NASA explained in a blog post about the wet dress rehearsal. 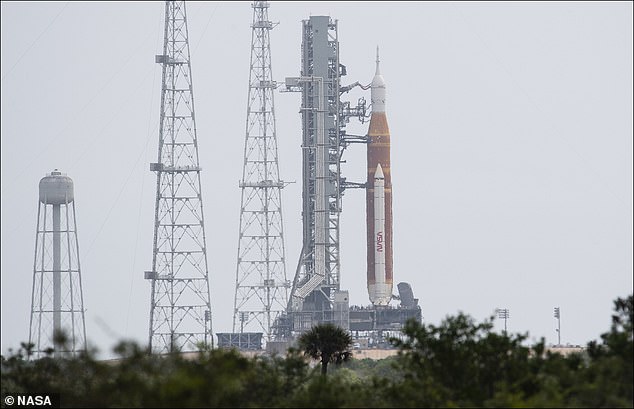 Atop the massive Space Launch System rocket is the Orion capsule, which will take the first woman and first person of colour to the moon some time after 2025 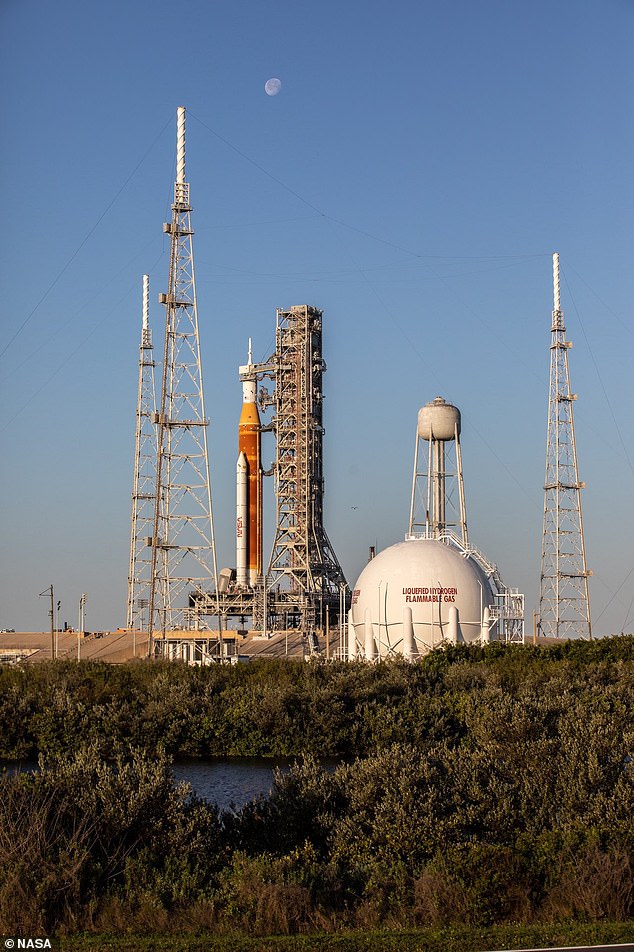 NASA expects the official Artemis I launch, the first involving SLS and Orion, to happen anytime from the end of May to mid-July – depending on the rehearsal

‘They will capture as much data as possible on the performance of all the systems that are part of SLS and the Orion spacecraft as well as the Kennedy ground systems.’

After the wet dress rehearsal, the combination of Orion and SLS will stay on Pad 39B for about a month, before rolling back into the hanger for more analysis.

While it is the first mission for the massive Space Launch System rocket engine, it will be the second for the Orion capsule, which was involved in a test flight in December 2014, going to space on a ULA Delta IV Heavy.

When it launches, Orion won’t have any crew on board, despite being able to hold up to four astronauts. Instead, it will carry dummies to the moon and back.

These are designed to replicate human weight and give scientists and engineers and insight into flight performance, without putting humans at risk.

The Artemis I mission will see the Orion spacecraft, the SLS and the ground systems at Kennedy combine to launch the Orion 280,000 miles past Earth around the moon over the course of a three-week mission.

If Artemis I is a success, then NASA will send Artemis II on a trip around the moon, this time with a human crew on board.

The Artemis II mission plans to send four astronauts in the first crewed Orion capsule into a lunar flyby for a maximum of 21 days.

Artemis was the twin sister of Apollo and goddess of the moon in Greek mythology.

NASA has chosen her to personify its path back to the moon, which will see astronauts return to the lunar surface by 2025 –  including the first woman and the next man.

Artemis 1, formerly Exploration Mission-1, is the first in a series of increasingly complex missions that will enable human exploration to the moon and Mars.

Artemis 1 will be an uncrewed flight that will provide a foundation for human deep space exploration, and demonstrate our commitment and capability to extend human existence to the moon and beyond.

During this flight, the spacecraft will launch on the most powerful rocket in the world and fly farther than any spacecraft built for humans has ever flown.

Artemis 1, formerly Exploration Mission-1, is the first in a series of increasingly complex missions that will enable human exploration to the moon and Mars. This graphic explains the various stages of the mission

Orion will stay in space longer than any ship for astronauts has done without docking to a space station and return home faster and hotter than ever before.

With this first exploration mission, NASA is leading the next steps of human exploration into deep space where astronauts will build and begin testing the systems near the moon needed for lunar surface missions and exploration to other destinations farther from Earth, including Mars.

The will take crew on a different trajectory and test Orion’s critical systems with humans aboard.

Together, Orion, SLS and the ground systems at Kennedy will be able to meet the most challenging crew and cargo mission needs in deep space.

Eventually NASA seeks to establish a sustainable human presence on the moon by 2028 as a result of the Artemis mission.