For the first half of 2022, the 5G race in the US didn’t change much, according to the latest report. Even though Verizon and AT&T both began deploying C-Band spectrum in order to boost their networks with mid-band 5G, it’s T-Mobile that remains king with a “commanding lead” over the others.

The report comes from RootMetrics, who released their “5G 1H 2022” findings for the US. This is one of those in-depth reports we look to a couple of times per year to get a good feel for the best networks you should consider signing up for. Since it’s down to just 3 networks in the US, these don’t hit quite the same as they once did, unless we look at this seemingly never-ending battle to be the top of the 5G charts.

The basic takeaway here is that, yeah, T-Mobile’s 5G network offers the “Best 5G experience” and has remained “comfortably ahead” of Verizon and AT&T in both availability and speed. The only category they are continuing to improve on is in reliability, which to be honest, comes off as a somewhat obscure test of “getting connected and staying connected” in a city. Verizon, in case you were curious, is the best at 5G reliability and has topped that category for the third straight report.

The image below tells a bigger story than I just described above and really shows that “commanding” lead by T-Mobile in 5G availability and 5G download speeds. Out of 125 markets, T-Mobile claimed the available crown in 100 of them for availability. AT&T nabbed 39 and Verizon only managed 3. For 5G download speeds, T-Mobile grabbed 75, while Verizon only took 11. AT&T won exactly 0 markets for speed. In case you were wondering why these totals aren’t adding up to 125, RootMetrics has an explanation for all of that in their full report here.

What should your takeaway be? Well, that T-Mobile made the right bet on mid-band and low-band 5G, with a big focus on that mid-band spectrum they got from Sprint. Mid-band 5G offers the best experience, with high speeds and range. Because of the mid-band spectrum they got from Sprint, that’s the reason for their massive (current) lead. That said, Verizon and AT&T have spent billions to acquire C-Band (which is mid-band) spectrum to try and catch-up. They have begun deploying that and will surely make a dent in T-Mobile’s lead. It could be a while, though.

For now, and likely for the foreseeable future, T-Mobile is and will be the 5G king.

Finally, here’s a fun little snapshot of the carrier highlights for all three categories. Those median download speeds in Fayetteville, NC are quite nice. 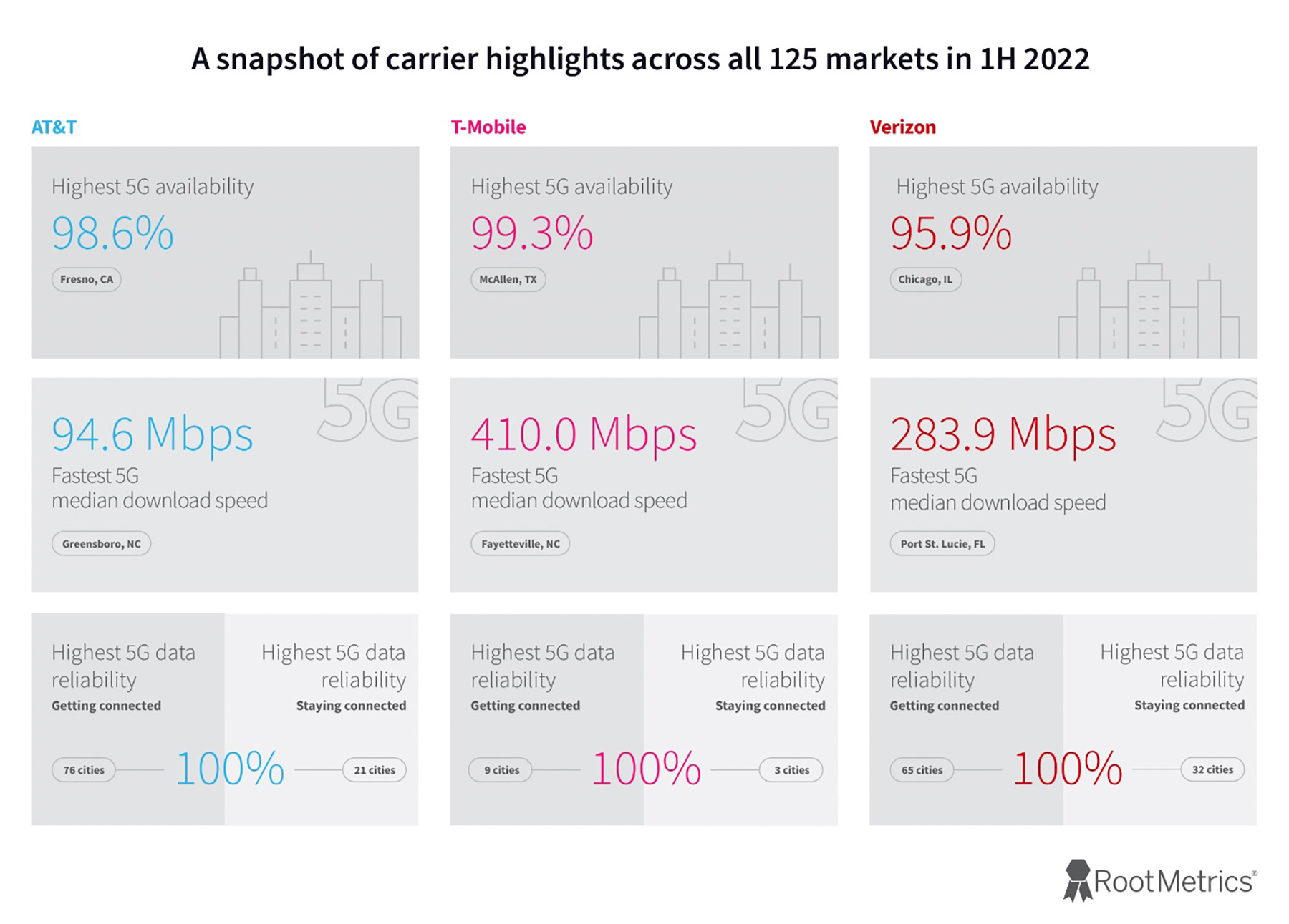