Among the Australians set to shoot for gold today is high jumper Eleanor Patterson, the reining world champion.

Patterson, who won gold at the 2014 Commonwealth Games in Glasgow as a teenager, attacked the Birmingham Games with a head of steam following her gold-medal breakthrough at last month’s World Athletics Championships in Eugene.

Patterson won’t be joined in the field by compatriot Nicola Olyslagers, who withdrew because of a torn calf.

“It’s both disappointing and devastating not to be able to compete in the women’s high jump final,” Olyslagers, who won silver at the Tokyo Olympics, said in a statement.

“What was thought to be a tight calf after my qualifying round turned out to be a torn muscle in my jumping leg.

“Of all the emotions and shock I could feel in the moment, I still have peace.

“Winning bronze at the Commonwealth Games four years ago allowed my professional career as a high jumper to begin. It was a competition that changed the trajectory of my life.

“My prayer is that someone else’s dream comes alive tomorrow as I cheer them on from the sidelines.

“Let’s go cheer Eleanor on as she jumps for Australia so well out there.” 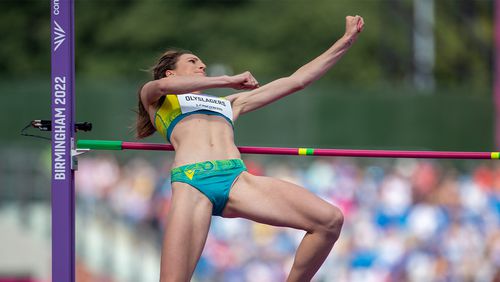